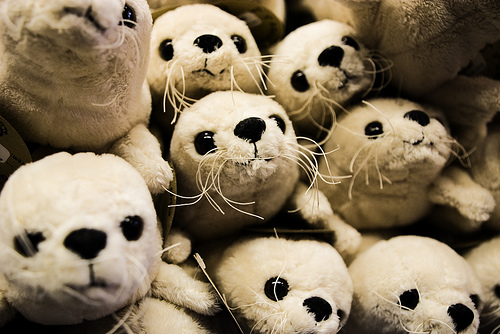 In part one, I talked about how to post your logo project on vWorker. You may also want to refer to the beginning of my logo for less than $100 search that inspired this series.

Today, I’ll give you some tips on how to go about choosing a designer once all the bids have come in.

Your First Look At The Logo Designer Candidates

My logo project drew 52 bids in 24 hours on vWorker. You’ll probably be dealing with a similar number. That’s a lot of bid descriptions and portfolios to wade through and it could easily take you an entire day to thoroughly review them all. Instead, I suggest making a quick sweep through all the bidders’ messages. vWorker gives you the option to hide any bidder. You’ll use that function to hide the non-qualified bidders. You can always restore them later if necessary.

Disqualify (hide) any bidder that a) included the type of generic/boilerplate template you told them not to include in your description. (See Part I for further explanation), b) did not include samples of their work via an attachment or link or c) included something in their message that indicated they either didn’t read your description or have poor communication skills.

Here’s the type of message I like to see from bidders:

My name is Daniel and I have more than 7 years of experience in creating identities for different companies.

I’ve read your project description and I would be interested to work with you on this project and provide you with a high quality logo for your company.

Attached you can find a few examples of logos I’ve created until now.

Because I am new on this website and I want to make a name here I will only charge you 35$ for creating this project. Usually I would charge more than 70$ for a similar project.

If you are interested in my offer please reply and I will further describe the steps that we will have to take in order to be sure we will have a successful project together.

Looking forward to your reply,
Daniel

Daniel, who is from Romania, made it clear that he read my project description, can communicate well, and that he’s got lots of experience creating logos. He also pointed out that because he was new to vWorker and trying to build up his feedback rating, he was willing to do the job for half his normal rate.

In my original project description, I mentioned that I was looking forward to working with the winning bidder and giving them great feedback. That’s because, for reasons you’re about to see, feedback is very important to bidders on vWorker. It’s not unusual to get a great designer for an extremely low bid when they’re new to the site and trying to build their reputation.

Here’s the type of boilerplate message that I frequently see that baffles me: (Keep in mind this is a bid for doing my logo)

I am working with ASP.net 2.0/3.5, AJAX, Classic ASP 3.0, JavaScript, VB Script, DHTML, XML, SQL Server 200/2005, ORACLE, Ms-access. I have more than 7 years of experience in this field. I am MCTS(Microsoft Certified Technology Specialist) and also ITIL certified professional.

I am also providing the following services for SEO & Listing:

I will be able to provide you a suitable solution. Please award this project to me and I am sure you will be happy with the output.

Please let me know if you have any question for me.

Believe it or not, that’s an edited version of his message which also included links to about 50 different websites. It’s funny. Ashish claims to be able to do just about anything on a computer other than designing a logo.  Obviously, he’s probably pasting this message into every single project he bids on. It might have worked had I been hiring a programmer. Needless to say, Ashish didn’t make the first cut. So any bids you see with a description like this, hide them.

Once you’ve narrowed down the list, go back through the remaining bidders and pay close attention to two things: User Feedback and Worker Ranking. Take a look at the image below (click on the image to see it full-sized). 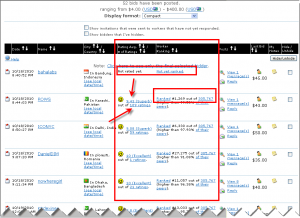 For each bidder, you’ll see a feedback rating on a scale of 1-10 with 10 being the best. For the most part, you want to ignore any bidder with a rating below 8.5 or 9. You’ll also see bidders (like BajaLabs in the picture) that have no ratings yet. That means they’re either new to vWorker or a bidder with a bad reputation that’s decided to start over under a new handle. You don’t necessarily need to eliminate those bidders but I’d ignore them until you’ve had a chance to review the higher rated bidders.

You’ll want to dig deeper than just glancing at the feedback numbers. Click on the word ‘ratings’ for each candidate. That’ll take you to a page that lists the individual feedback from those that have hired them in the past. In addition to feedback, you’ll see what the actual projects are. I’ve seen bidders on logo design projects that at first glance have brilliant feedback but when I look at their feedback page, I see they’ve gotten all those 10’s for doing jobs like research projects, programming, translation, website building rather than logo design.

It’s also worth noting the actual comments when they’re included. You’ll sometimes see a worker get a high rating but the buyer will note they were a little slow getting the work done. If you see a partially negative comment once on a long list of otherwise positive reviews, you can usually ignore it. But if you see it more than once, pay attention.

In the next column over, you’ll see what’s called Worker Ranking. This is based on tests administered by vWorker. You can see where the bidder ranked vs their peers. I don’t give this ranking as much weight as I do feedback when it comes to a logo design project because creative talent is difficult to measure. I usually pay more attention to that number if I’m hiring a programmer.

Once you’ve hidden all the types of bidders I’ve mentioned, your list will probably be down to half its original size. If in going through all the bid descriptions you had a designer offer to create a sample for you in advance, take them up on their offer. I usually keep an eye out for this type of offer when bids first start coming in. Sometimes I’ll get a design that knocks me out very early on. I still look at their portfolio first. No point in wasting your time or theirs if it’s obvious they don’t have the required skills.

Often bidders will have their own logos displayed on their bid page and, quite often, I’ll disqualify them based on what I see there. I’m amazed by how bad some of the personal logos are for people that are representing themselves as graphic artists.

I ended up with several strong candidates. The bidder I chose had 4 ratings of 10 and did both web design and logos. He communicated clearly and showed me a dozen samples of his work. They all looked great even though the styles varied tremendously. Some designers I’ve seen have outstanding logos in their portfolios but the quality seems to vary. This designer was consistently good.

The logos I see range from something that looks I could have done it myself to high-end corporate logos and everything in between. Many designers fall into a range where they’re good at creating a logo that’s good enough for a B&B, insurance agency or a dry cleaner. Those designers are fine if that’s the type of business you or your client owns. For my particular project, I want something that looks like I invested $5,000 because logos and branding are actually part of my business.

By the way, you can accept more than one bidder on vWorker. And sometimes, if you’ve got the budget for it, that can be the way to go. If you’ve got three strong candidates bidding in the $50 range, consider hiring all three. Even paying all of them, you’ll end up with a great looking logo for $150 or less.

Of course, price is a consideration, too, but I never automatically go with the lowest bid. I’ll usually eliminate the really high bids. Most bids in my project were in the $35 to $100 range but one designer bid $400. I eliminated him when it was obvious I had several strong candidates bidding under $100. The winning bid on my project was $85.

Once you accept a winning bidder, you’ll be offered payment options on vCoder. Your payment isn’t going to the designer, though. It will be held in escrow by vCoder until the project is completed. When making payment, you’ll see options on making a down payment vs. payment in full. You won’t choose that option for this project. That option is for large projects like software design or a major website build that might take several weeks to complete. For a logo project, the designer wouldn’t get anything up front. Instead, the money isn’t released to the designer until you notify vWorker that the project is completed.

I have a few more tips about ongoing communication once the project is underway plus, I’ll show you the first drafts of my new logo in the next installment. In the meantime, if you have a question or a comment, please leave one below. I’d love to hear from you.

Cloudy day on the river